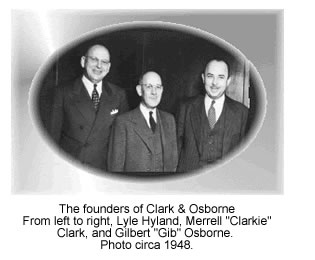 Clark & Osborne was founded in Indiana in 1940. Merrill Clark, a salesman of abrasive grinding wheels, and Gilbert Osborne, an independent manufacturers’ representative, teamed up in 1944 and later added a third partner, Lyle Hyland who was a salesman of industrial supplies.

In the early days, Clark & Osborne specialized in the sale of die supplies, screw-machine tooling, grinding wheels, gages, air tools, and cutting tools. Some of the products sold back then were Abrasive diamond dressers, Everede boring bars, and Superior die sets. The three partners worked out of a spare bedroom in Gil Osborne’s home with Frances Osborne, Gil’s wife, answering the phones, picking up the mail and keeping the books.

In the late 1940’s, C&O moved to a two-room office in the Indianapolis suburb of Broad Ripple and hired a full-time office manager. The original three partners remained strictly manufacturers representatives, avoiding products that required them to become distributors.

In the late 1940’s, C&O moved to a two-room office in the Indianapolis suburb of Broad Ripple and hired a full-time office manager. The original three partners remained strictly manufacturers representatives, avoiding products that required them to become distributors.

During the 1950’s the three original partners retired one-by-one and their places were taken by two sons and a son-in-law; Bob Clark, Dick Osborne and Joe Vanderfleet. It was under the second generation of partners that C&O teamed up with Dayton Progress. After a year or so with Dayton, C&O realized that they had been propelled “big time” into the die supply business by the strong and ever-increasing Dayton sales. It was clear to the C&O team that Dayton, under the dynamic leadership of Bob Gargrave and others, was going to be the leader in punches and dies. C&O concentrated heavily on Dayton, Superior, and other tool & die related lines and soon became among the nations top tool & die distributors.

Clark & Osborne went through many growing pains with non-standardized components, the reluctance of old-time tool makers to use “store-bought” die supplies, and constant competition but C&O eventually prevailed. As Dayton, Superior, and the other suppliers grew, so did C&0 by adding more people, inventory, and a location in Louisville called Clark & Osborne-Kentucky.

In the 1970’s to 1980’s, the second generation of partners retired one-by-one and history repeated itself when, for a second time, two sons and a son-in-law took their places; Jack Clark, Gary Osborne and Dennis Paternoster. Since then, C&O has continued to prosper by increasing sales regularly, adding more office and warehouse space, adding more employees and new customers, increasing inventories, and adding new and more comprehensive product lines.

At present C&O is now transitioning into its forth generation of family ownership and has trained salespeople who travel to assist customers in Indiana, Kentucky, Michigan, Illinois, and Ohio. Skilled employees operate customer service, warehousing, accounting, management information systems, and personnel.

How will I know if you received my order?

We acknowledge your order by sending a FAX to you which states the items and quantities ordered, the price of each item, and the delivery of your order. Please use this to check that your order is correct.

Orders receive immediate attention. Most orders are shipped within 1 to 2 business days although lead time may very. Most orders will be drop-shipped directly to you from the manufacturer in order to provide the earliest possible delivery.

What if I receive something damaged?

If you receive merchandise that has been damaged in transit it is important to keep the shipping carton, packing materials, and items intact. Please contact Customer Service to initiate a claim and a replacement order.

A Credit-Application form can be obtained by contacting our Customer Service Department. If you already have a credit application, please email it to sales@clarkandosborne.com.

What about sales tax?

If your order is shipped to an address in the States of Indiana, Illinois, Kentucky, Ohio, or Michigan you may be subject to a sales tax. If you have a valid sales tax resale exemption number, please furnish the form with your order.